The story of East Bay Camp goes back to the early 1900’s and the damming of Money Creek to provide an improved source of water to the City of Bloomington, IL.  This account begins with the United Methodist Church's purchase of the camp in the 1980s

In 1874 the well water provided to citizens of Bloomington was so hard that it was advertised to have unusual medicinal value and was sold to some people on that basis. A chemist in the 1920’s called it the hardest in the state, estimating that Bloomington would save a ton of soap a day by having soft water. To provide a better source of water for the citizens of Bloomington, the city council decided a lake could be built by placing a dam on Money Creek. To help sell this idea, the council suggested that the lake formed behind the dam could also be open to recreation for area citizens.

Aug 4 - Heavy rains flood the valley where workers were working on the dam and levees.  "the temporary lake gave an impression of what the valley will look like when the dam is done..."  Pumping station well underway and would soon "be inclosed (sic) in brick and will take on the old Italian atmosphere which appeared in the plans."

Dec 5 - Money Creek valves shut and the lake began to fill with goal of having it full by March 1 to begun delivering water to Bloomington.  "As the lake rises it will assume a long, ragged, forked outline not unlike the shape of a 'freak' horse, its north-and-south length about two and a half miles, it's length about four and one half miles, it's water's edge about 15 miles long, its total capacity two and a quarter billion gallons of water."

Dec 15 story: Using imagery of a play, writer describes the "final acts" on the lake, namely clean-up, landscaping, and continuing to fill the lake.

There were also some who felt that part of the land and shoreline around the lake should be reserved for the public.  Rev. Frank Breen, a prominent Protestant minister in Bloomington, felt a call to develop the camp, so in the fall of 1929, Rev. Breen and an attorney representing the Bloomington Water Company, Lester Martin, sealed the deal next to Money Creek. With a simple handshake, 40 acres became East Bay Community Camp with Rev. Breen directing. The very next summer the camp opened to various community and church groups 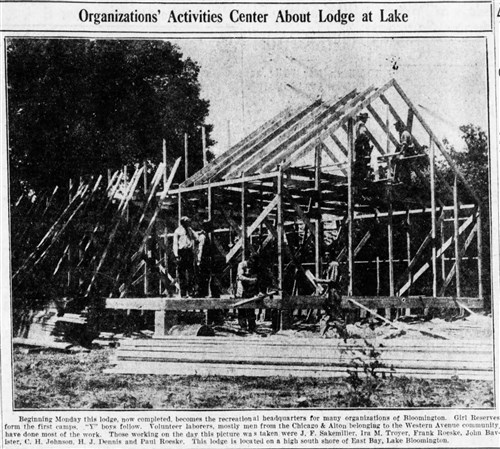 funded by volunteers from various not-for-profit groups, such as Girl Scouts, Camp Fire Girls, and YWCA members all contributed labor and funding for the buildings. (See photo from the Bloomington Pantagraph, July 6, 1930).  When denominational groups began developing church youth camps in the 1930s, their search for adequate facilities brought them to East Bay. Every major church in the state had part of its regular camping program at East Bay each summer.

Rev. Breen also helped organize the Western Avenue Community Center in 1926 and became full-time director in 1931. When many families were without means during the Great Depression, this center, located on the working class west side of Bloomington, offered much-needed recreational activities. In 1932, Breen was the recipient of the first Daily Pantagraph Community Betterment Scroll. He was director of this center until 1956, when he retired to devote all his time to East Bay Camp. Frank Breen died at Brokaw Hospital, Normal, on November 13, 1967.

Rev. Breen married Thelma Van Ness in 1945 (he had been married once before, to Flora J. Giles in 1908, but she died in March 1927). Thelma Breen was a graduate of Illinois Wesleyan University and the University of Illinois Library School. She also studied at Columbia University and worked in the New York Public Library system on Long Island. Once in Illinois, Thelma worked for McLean Township Library back when the library was housed in the back room of a barbershop. In 1923 she began working at Withers Public Library (Bloomington's public library), and in 1941 she became head librarian. She held this post until her retirement in 1972. Thelma helped found Western Avenue Church and East Bay Camp with her husband. She died at the age of 79 in August of 1979.

The mission of East Bay Camp was, from its inception, to provide a place where children and youth could enjoy Lake Bloomington without their parents having to own a cabin. Times were hard in 1929 because of the Great Depression, and East Bay suffered, as did people, businesses, and organizations dedicated to the public good.  The only things the camp had were 40 acres of land, a few willing workers, and Miss Vera Snow's signature on a $1,500 loan.

By 1934 the timber around Lake Bloomington gave way to a summer village with a score of buildings and a thriving camp program. Rev. Breen saw a crisis on the horizon, however, as larger groups were eager for use of the camp.  He said, "The pull now is more uphill than it has ever been, and I ask that you all stand by to make East Bay all that we dream for it."

With the Depression over, camping increased in popularity, and East Bay Camp was virtually bursting at the seams since it was the only camp in the whole state. The Evangelical Reformed Church launched a program at East Bay Camp under the leadership of a clergy from Minonk. Their first camps consisted of around 20 to 25 campers and rapidly grew to 1,000 campers in the course of a summer."  The growing interest in retreat ministries by very diverse Christian groups over time resulted in break-off camps that could exercise more control over values and regulations.  Twelve camps in all had their beginnings  at East Bay.

Things started to look bad for East Bay Camp so Rev. Breen turned to various places trying to get someone to take over. He first tried the Presbyterians, but they'd had an experience in Michigan for many years and they were not interested. Next he went to the Illinois Church Council followed by other groups and got the same answer – not interested. As the years passed, more Methodist groups were using the camp than any other groups. Ultimately, The Methodist Church entered an agreement with the Community Camp Associates to back the camp financially putting $30,000 toward the camp facilities. With this level of investment, the bishop felt that they should have weight in the associates.

At that time, the camp was governed by a local group called the Community Camp Associates which consisted of 10 community leaders who composed a board responsible for the camp. Their focus was to insure a fair share of use for the investment that camping groups would make. While the bishop’s proposal made sense, many were concerned that the Methodist Church would take over and limit use of the camp. To meet this concern the associates reformed into a board of trustees with the camp being run by an administrative board. On the administrative were representatives from participating groups, people who were involved in camping in the same way as the Methodists were. These groups included the Evangelical Reformed, United Brethren, American Lutherans, Presbyterians, the GAA, the Kiwanis Club.

Then in the 1980’s the Illinois Great Rivers Conference of the United Methodist Church took ownership of the camp and continues as the owner today.