A Master Plan for East Bay

Since 1930 East Bay Camp and Retreat Center has been serving campers and guests of all ages.  To 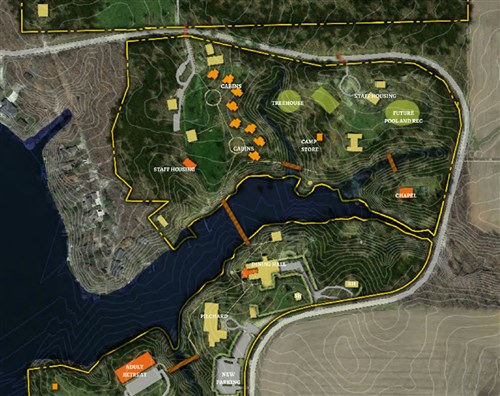 enhance its services to users the camp has embraced a master plan that includes new construction, remodeling, and relocation of some operations.  The redevelopment applies principles that make for  transforming retreat experiences.  Principles include building for flexibility and maximum utility for programming,  modernization that appeals to the preferences and needs of today's guest, and the beautification of the site.

In broad strokes the plan includes new youth cabins for campers, a new entrance to the dining hall, remodeling of Pilchard Hall, a pavilion and restrooms in the Three Bears area that will better serve the day camp, a new health center; a new chapel; a relocated office; and an expanded parking lot, among other things.  There will likely be several phases to the site makeover as well as several capital campaigns.  In the aerial view of the proposed makeover above, orange represents new construction and yellow buildings that will be maintained but either remodeled or repurposed.  The light green areas in the top right of the image represent a "destination" recreation area that puts most recreational activities in one place.  A tree house village is also proposed for this area.

East Bay envisions two all-season camper "villages"-- clusters of four cabins that have a capacity of 18 each.  An aerial view of the concept is provided below.  Each of the cabins would have its own restrooms and the flexibility to be divided in half for

families or small groups of males and females.  Each cabin village would also have its own outdoor gathering place with a fire ring in the very center.  They could be used comfortably in any season and are just a short walk from the dining hall.

Concepts of the floor plan and exterior of the cabins are pictured below. 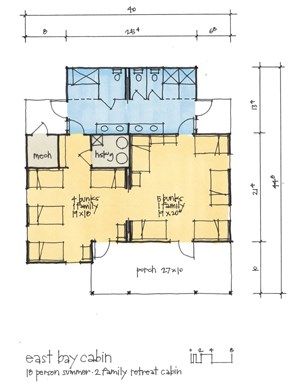 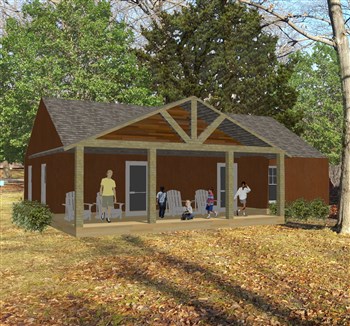 The master plan proposes to move most lodging and activities to the lake side of the camp in order to meet the navigation and accessibility needs of all guests in all seasons and to eliminate potential problems with guests having to cross a public road.  In the proposal all facilities on the north side of the highway will remain open, however, until they have outlasted their usefulness, at which time relocation will be considered.  The pavilion and restroom concepts in Three Bears will solve navigation issues for day campers.  The main office would be relocated closer to the parking lot, which would be expanded and more clearly defined.  The dining hall would have a new entrance built with a patio for gathering before and after meals.

A lodge for adults

From its founding, East Bay Camp has had a high commitment to children's and youth ministries, and that will continue to be a priority.

East Bay's future as proposed in the concept will also include an adult lodge that would accommodate 28 persons in 14 rooms with their own baths.  There would be a meeting place with windows overlooking the lake where groups could gather for worship, learning, and recreation.  A floor plan concept is provided to the right.

In the proposed master plan, East Bay will build a new chapel with a lighted cross at the apex of an inlet.  That location would permit the chapel to be seen from many places on camp and even out on the lake.  The lighted cross would stand as a beacon night and day.

East Bay Camp and Retreat Center is committed to a mission of providing transforming settings for re-creation, intensives for spiritual formation, and hospitality to all.  The site believes that the new master plan is an important step toward living more effectively into that purpose.

The map below shows how the core of the camp is conceived. Orange buildings are new, and yellow buildings are existing structures.  Green items represent "destination activity" spaces-- areas that are far enough away from the core to walk more than once a day.  That destination area would be developed for field games and for indoor activities like crafts.  The vision is also to build a tree house village for campers who enjoy roughing it a bit more. 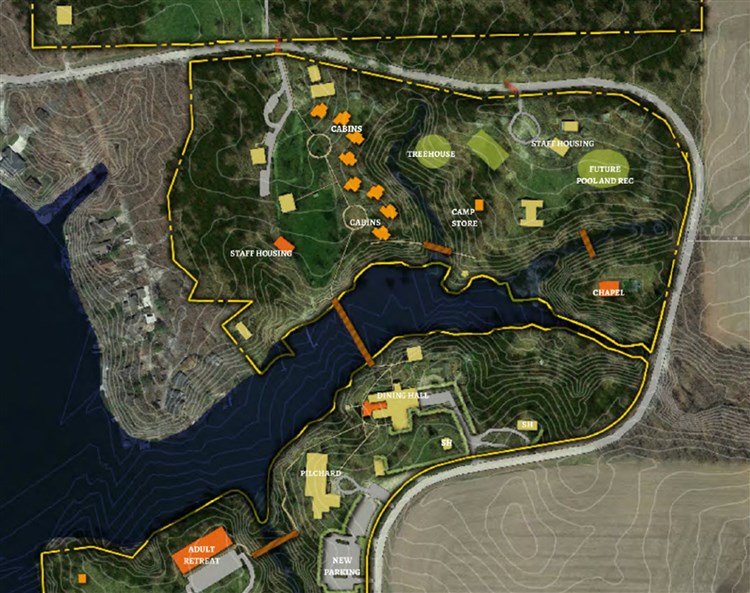